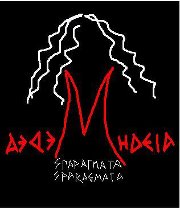 Title of the work: MEDEA - SPARAGMATA


This work utilizes elements of the ancient voice metric. The Soprano reveals ancient Greek script with a rhythmic recitation that was preserved in time through traditional Greek music (Epirus mourning songs) – a tradition that historically begins with the appearance of Pelasgic tribes, as cited by Homer in Iliad, στ. B\" 840 – prominent glissandi and very distinctive contrapuntal lines as they appear, for instance, at the end of Episode II (written for the Soprano and the Alto Flute). Furthermore, the work makes extensive use of polymodal (polytropic) harmony of ancient modes as well as many extended techniques on the Flutes.

A cardinal characteristic of the work appears in all – the free improvisations which the Soprano, Percussion and Contrabass use following preset patterns and instructions based upon a mix of notated and graphic scoring guides. Thus, there are parts of the work that include segments not absolutely defined, letting the musician the freedom to improvise following the dynamics of the particular and unique moment and the internal tension that unravels with a new aspect each time. This improvisatory characteristic imparts an element of uniqueness whereby no one performance of the work is the same.

The Female Voice, as it emerges from within the profoundly metaphysical and socio-cultural aspects of Euripides‘s tragedy “Medea”.

“With a delirious mouth she pronounces serious grounds… travelling through voice thousands of years periods to God.”
Heraclitus.

In Greek, logos (the “word”) embodies a sense of action as the word being uttered becomes a form of action in itself. Likewise, in Greek, thanatos (death) is metamorphic—it continues to grow and transform into other than itself. Language is the minimal interval between absolute’s ineffable and the animal’s primal scream. Language is the interval between inexpressible madness and a wisdom woven in silence.

In this work, the phonetic performance of words-as-actions expressed through the powerful emotions of the tragic heroine are based on the lost meaning of vocal fragments on one hand and the solid neoclassical form of phrases on the other. This contrast between unpredictability and stability creates and gives the work an unworldly character. Moreover, an acutely selective presence of such phrases (words-as-actions), attempts to manifest the enormous tensions of psychic processes which underlie the tragedy’s unfolding.